How to design for ethical engagement

Hi, my name is Neil, and I’m an addict. I’ll admit it, I’m addicted to technology, and you know what, given that you’re reading this article, I suspect that you are too.

Does any of that sound familiar? I suspect it probably does because we’re increasingly becoming too dependent on our digital devices. It seems like we’re all turning in to technology junkies; we’d rather stare into our little screens (like the photo above), than into the eyes of a fellow human being. You know that something has gone horribly wrong when people switch their beloved smartphone screens to grayscale in an attempt to help curb their addiction and when you can buy a box to temporarily lock your smart phone away in to prevent you from being able to use it!

And you know what, it’s not our fault that we’re addicted to technology. We’re only human after all. You see technology is too damn addictive. And why is it so addictive? Because it’s been designed by people like you and me to be so. It’s been designed to demand our attention, to draw us in, and to slowly but surely get us hooked.

Speaking as a UX designer I can’t help but feel a little bit guilty about this because as a UX designer it’s my job to help create engaging experiences. Experiences that users will want to return to time and time again. As Thomas Zoëga Ramsøy, neuroscientist and CEO of Nureons a consultancy that uses neuroscience to measure, predict and affect choice puts it, “attention is the new currency”. It’s a currency that the UX designers are increasingly being judged on.

Engagement is of course a wonderful thing, after all, an unengaging world would be a very dull and lifeless place. However, whilst an engaged customer might be great for business, I wonder, is it always so great for that customer? Rather than chasing engagement, should we instead be focusing on making a positive impact on people’s lives? Is it time to think about not just what is best for business, but also what is best for users, and even for society as a whole? I believe it is. I believe that we shouldn’t necessarily be designing less engaging experiences (like the smartphone grayscale screen movement), but aiming for ethical engagement. Let me explain.

being in accordance with the rules or standards for right conduct or practice, especially the standards of a profession

Or to put it another way, the UX industry should be striving for the right kind of engagement. We should expect designers to design experiences that are engaging in a good way, but not in a potentially harmful and addictive way. Going back to Thomas Zoëga Ramsøy he describes the right level of attention seeking as, “Having an interface that grabs people’s attention without disturbing them in the wrong way, without consciously intruding in their space, that’s the fine line”. The problem is, it’s a very fine line. How do you ensure that your interface isn’t intruding in someone’s space? How do you design ethically engaging experiences, rather than intrusive and potentially addictive experiences? Here are some things to think about.

Rather than chasing engagement KPIs, such as number of page views, session duration and frequency of visit, you should be focusing on outcomes, such as orders, subscriptions and upgrades. It’s outcomes that you’re aiming for, not engagement. Sure, engagement might help drive those outcomes, but not if it’s the wrong sort of engagement.

Even if on the face of it you’re just trying to get more eye balls on adverts, it’s still the positive outcomes of advertising, be it brand recognition, increased customers and increased sales that you should be aiming for.

We’ve all done it. Don’t try and deny you haven’t. We’ve all clicked on a link promising 15 times the cameraman caught more than expected, or 10 celebrities that you wouldn’t recognise today. Clickbait is of course just one persuasion technique, tempting users with a tantalising glimpse of what one little innocent click might bring them.

Notify only when necessary

How many notifications do you get a day? 50, 100, 200? I bet it’s a lot. I also bet that the vast majority of them aren’t really necessary, they’re just noise. They just needlessly suck up your attention. They’re information that’s not really important, such as the fact that someone has changed their LinkedIn profile photo, or that someone you follow on Twitter has just liked a tweet. Gee thanks, I don’t know how I’d cope without knowing that!

If you’re considering using a notification for an app, or sending an email update, always ask yourself the following question:

Does the user really need to know this?

According to the Department for Transport rush hour drivers in the UK spend on average a day a year stuck in traffic (hopefully not all at once). I bet if you were to tot up all the time you spent over the last 12 months trying to find and then change notification settings within apps and websites, it would be an equally mind-boggling figure. Whether it’s intentional or not, far too many apps and websites make it very difficult for users to change their settings, and to control when they are and are not notified.

Keep the interface to a minimum

You see interfaces get in the way, even engaging interfaces soon become tiresome. People don’t want to use interfaces, they want to get stuff done. Unless you’re designing a video game you should take up as little of their time as possible by keeping the interface to a minimum. Check out my article called why the best interface is just enough of an interface for 5 key ways to do just that.

Have you ever visited a large Ikea furniture store, such as in the photo below? Trying to navigate an Ikea store is like shopping within a giant garden maze, and not in a good way. You come in hoping to buy some new bedroom furniture, or office desk, and spend 30 mins zig zagging through the store, in a vain attempt to find what you’re looking for. Unless you really love furniture shopping (in which case, you need help) it can make for a very frustrating experience because Ikea have introduced a lot of friction.

When it comes to user experience, friction, whether by design, or not, gets in the way of the user getting their job done. Friction might be the needless extra steps that users are taken through; the unnecessary information that users must type in; or the advert that users must watch at least 5 seconds of before proceeding. Try to reduce friction as much as possible so that like a crack special operations squad, users can get in, do what they need to get done, and then get on with their life. 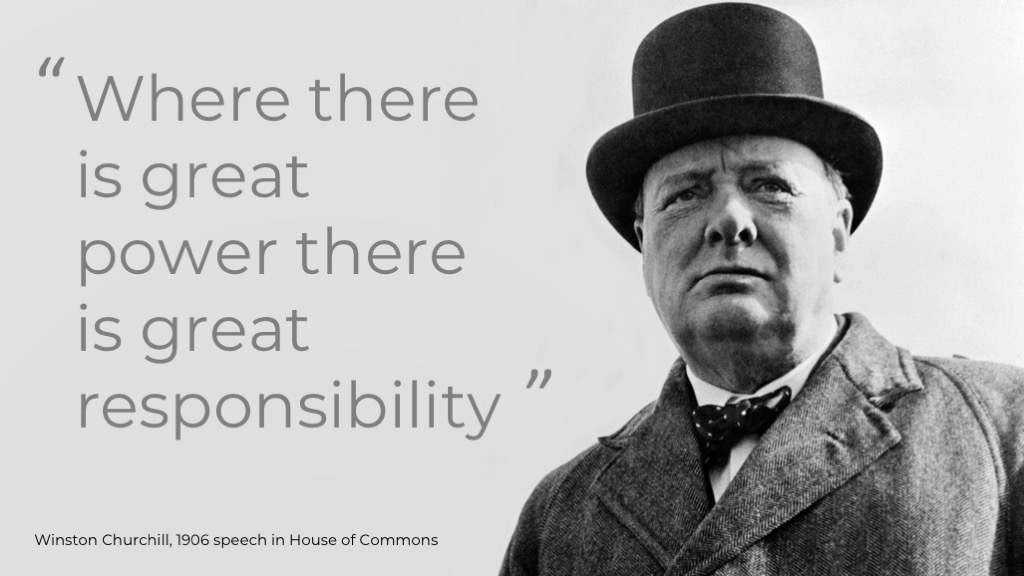 As a designer, you hold great power. The power to influence people’s behaviour and even their lives through the design of their environment, and the products and services they interact with. Design can be a powerful driver of social change and like a superhero you must choose whether you want to use your powers for good, or for evil. Even if they haven’t necessarily followed their own advice, I think that Google’s don’t be evil motto (which has now changed to ‘do the right thing’) is a good philosophy to follow:

Don’t be evil. I believe strongly that in the long term, you will be better served by doing good things for the world even if you forgo some short-term gains by doing so.

Addiction to technology, whether in the form of a smart phone, a tablet, a laptop or a smart TV is a problem that cannot be ignored. It’s a problem that designers have in-part caused and should help fix. To do this we must seek to design more ethically engaging experiences. When designing we must value not just what is best for business, but what is best for users and for society as a whole.

Young people using their phones at a party by Tomwsulcer

Harry Potter and the Studio Tour of Secrets

How to deal with design debt